PROPOR2016 is the 12th edition of the PROPOR conferences.

PROPOR2016 is held in 13-15 July 2016 in the historical city of Tomar, Portugal, a world heritage site, 1 hour north of Lisbon by train. It is hosted by the University of Lisbon and the NLX-Natural Language and Speech Group from its Department of Informatics at the Faculty of Sciences.

PROPOR – International Conference on the Computational Processing of Portuguese is the main scientific meeting in the area of language and speech technologies for the Portuguese language and on the basic and applied research issues related to this language.

The meeting has been a very rich forum for the interchange of results and partnerships for the researchers dedicated to the computational processing of Portuguese and the technologies for the Portuguese language. It brings together research groups in the area, promoting the development of methodologies, language resources, processing tools, applications and projects that may be shared among researchers and practitioners in the field.

PROPOR2016 is now over. Here it is a group photo with most of the participants in PROPOR, who are the pillars of the community working on the Portuguese language technology, with the Tomar aqueduct pillars, the logo of the conference, in the background. 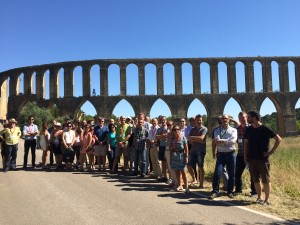